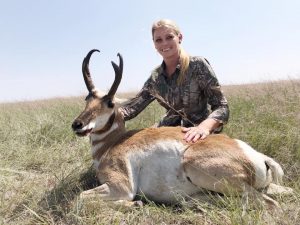 The Pronghorn name comes from the two distinguishing horns that sit upon their head. The horns are covered with a keratinous casing that covers the bone. The pronghorn has a color of reddish-brown with a white stomach, behind, parts of the facial area and throat are white as well. The pronghorn measure from 4-5 ft long from nose to tail, and around 3-4 ft tall. The males weigh around 80-150 pounds while the females weigh slightly less at about 70-110 pounds. The pronghorn antelope is famous for being the fastest land mammal in North America. They are mostly found in western and central North America. Pronghorns live on a diet of grass, vegetation, cacti, forbs, and shrubs. Due to these facts, they generally are found in grassland regions however they are sometimes found in deserts.

Draw Required: Depends on the location of the hunt.