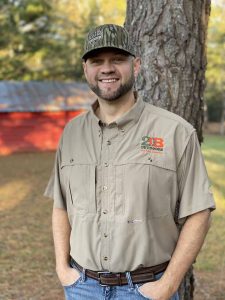 Derek Eaves is a native of Louisville, MS where he learned at an early age you had to work hard and pursue life with positive passion if you wanted to be successful. He is a University of Mississippi alumni where he continued his work ethic and drive as a pitcher for the Rebels baseball team.
Derek was employed 13 years with Eli Lilly and Company as a Sales Trainer and now holds the Sales Manager position at Fair Oil Company in Louisville, MS.
Eaves currently serves as the Public Relations/Social Media Director for Mississippi Bowhunters Association. He also enjoys volunteering and assisting with the NWTF and Whitetails Unlimited.
Derek is an avid archer and outdoorsman who loves hunting and trapping.  He enjoys every hunting season, but his passion is chasing Whitetail in the fall and Turkey in the spring. Derek is driven by the challenge that being an exclusive bowhunter brings.  He is looking forward to upcoming hunts of antelope and elk for 2020.