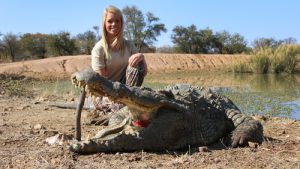 My name is Kendall Jones, I’m a Texas raised hunter, cheerleader, and dedicated Texas Tech student. Born in Cleburne, Texas.  I was raised in the outdoors as a huntress, and I always strive to achieve my personal best in everything that I do.

I have big dreams and ambition to represent the next generation of hunters all over the world. I started hunting when I was just 8 years old and have been in love ever since. At the age of 9, I accompanied my father on his Big 5 hunting trip to Africa in 2004. At the age of 14, I became the youngest person to harvest the Africa Big 5, taking a white rhino, lion, Cape buffalo, leopard, and African elephant. In 2014, I skyrocketed to fame after my Africa hunt posts created a storm of criticism from mainstream media and support from hunters and conservationists around the world. That same year, I received the Safari Club International Youth Hunter of the Year award.

I am currently attending Texas Tech University where I am pursuing a Double Major of Marketing and Management, as well as being a current member of the All-Girl Cheerleading Squad. When I don’t have school or cheerleading, I love being in the outdoors and hunting with friends and family. I also have a few episodes on my web series called”Kendall Jones: Game on”. This series features my friends and I going on different adventures and taking on different hunts. My biggest goal is to spread the word and bring awareness to conservation. I hope to inspire young children as well as the many female hunters out there to stay in the outdoors!