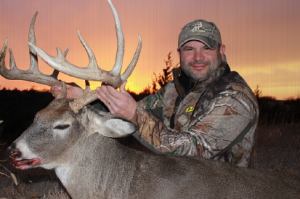 Kenneth Lancaster has an exceptional reputation in the hunting
industry. Kenneth’s background in archery and his work as a guide, videographer, and hunter, has enhanced his popularity as a devoted outdoorsman.

Kenneth always makes time for his family. Holly has actually appeared on numerous Outdoor Channel shows herself!
With over 20 years of experience in the Outdoor industry, he has won the hearts and respect of fans of all ages.