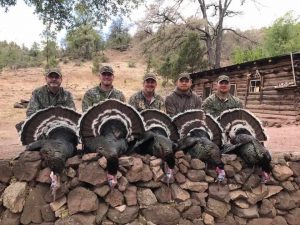 There are six subspecies of turkeys, which are all native to North America. The must numerous of all turkeys is the eastern wild turkey, also known as the forest turkey. These turkeys were the ones hunted by the pilgrims and to this day they still cover the eastern half of the United States. The male turkeys (aka gobblers) weigh around 16 to 22 ounds on average while the females (aka hens) weigh slightly less at 8 to 12 pounds. The gobblers have a beard that reaches 6 inches or more of altered feathers on his breast. They also have sharp spurs on the legs for fighting. The hens don’t have beards or spurs however both genders have a snood which is a dangly appendage on the face. Both genders also have a few feathers on the head and a wattle which is a red dangly bit under the chin. Turkeys have around 5000 to 6000 feathers.