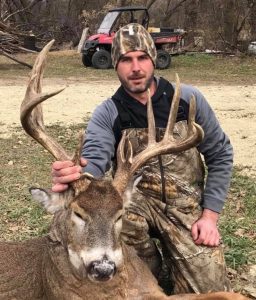 The name white-tailed is a reference to the white underside of the deer’s tail, which is shown when the deer senses its in danger. The white-tailed deer actually have a reddish-brown color coat in the summer which fades to grayish-brown in wintertime. Males deer are known as bucks which can easily be distinguished by their antlers. The male deer grows new antlers every year. The white-tailed deer is the smallest breed of deer in North America. They weigh around 100-310 Ibs. The white-tailed deer generally live in woodland areas; however, they can often be found around the borders of urban areas and farming counties.